I’m possibly an idiot, because when I aksed Britt to marry me (January 2012), the possibility of a wedding didn’t even cross my mind.

This is a strange circumstance for a marriage celebrant to find himself in, because I was sure of one thing, that I wanted to live the rest of my life in union with Brittany Snow. Everything else that was coming my way, I had no idea about.

Hours later family were on the phone with ideas, themes, dates, and plans, and before you know it we’d booked a venue and had an inbox full of propsals, quotes, and unavailabilities but the event we were planning wasn’t ‘us’. I’ve heard so many couples tell me the same thing in different words, and it’s inspiring to hear others go through the same process of asking ‘what is this all for?’ and ‘what are we hoping to achieve here?’

I’m not going to act like we were master wedding planners and we curated and created the perfect day that reflected our future selves, but in hindsight I think we did a pretty amazing job.

Britt and I love our friends and family, but we don’t love being in a crowd, so as much as I pushed for a stadium spectacular, we celebrated with about forty of our closest.

Words are important to us, so we wrote and exchanged personal vows. Probably the only thing we’d change today would be the reading them off our phones, but it was pretty damn quirky for a 2012 wedding.

A staple of our relationship from early on was the importance of our home being a place of peace, happiness, and joy, so we celebrated after the ceremony at home.

We like food but we’re not foodies, and we like a beer, but we’re not boozers, so we hired a catering friend to cook for us in the kitchen at home and we bought a few brews but invited everyone to BYO if they had a particular taste.

But let me take you back to the ceremony. We as a couple view the marriage ceremony as a public(ish) moment of expressing, finding, discovering your identity not only as individuals but as a couple.

You’re saying “this is us, and us is a thing now, we’re totally a thing”, and that’s not something we do that often with so much permanency.

I’m the first one to post something on Facebook yesterday then disagree with myself tomorrow. But in your marriage ceremony you’re carving out a new future together, and although you can – and hopefully do – acknowledge that you are two people continually growing and learning, you’re making a public and legal declaration that your tomorrow is going to be better because you’re together.

The words you say to make this statement we call a vow, and those words and this commitment have been forming for a while now. For Britt and I it started about five years earlier over coffee where I bowed out sure that I was so far out of my league that I was probably about to be asked to leave the league by league security. Eventually you form some words that result in a changed Facebook relationship status and eventually you start thinking about growing old together.

We created our wedding with that in mind, this is our real life and our real life is spectacular, if for no other reason than our newfound status of “this is us” is an adventure we're on from here into eternity. 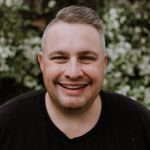